Medical specialty, operative procedures for the treatment of vascular disorders

Vascular surgery is a surgical subspecialty in which diseases of the vascular system, or arteries, veins and lymphatic circulation, are managed by medical therapy, minimally-invasive catheter procedures and surgical reconstruction. The specialty evolved from general and cardiac surgery and includes treatment of the body's other major and essential veins and arteries. Open surgery techniques, as well as endovascular techniques are used to treat vascular diseases. The vascular surgeon is trained in the diagnosis and management of diseases affecting all parts of the vascular system excluding the coronaries and intracranial vasculature. Vascular surgeons often assist other physicians to address traumatic vascular injury, hemorrhage control, and safe exposure of vascular structures.[1]

Early leaders of the field included Russian surgeon Nikolai Korotkov, noted for developing early surgical techniques, American interventional radiologist Charles Theodore Dotter who is credited with inventing minimally invasive angioplasty (1964), and Australian Robert Paton, who helped the field achieve recognition as a specialty. Edwin Wylie of San Francisco was one of the early American pioneers who developed and fostered advanced training in vascular surgery and pushed for its recognition as a specialty in the United States in the 1970s. 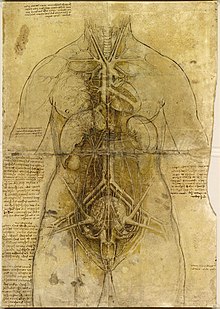 Medical science has advanced significantly since 1507, when Leonardo da Vinci drew this diagram of the internal organs and vascular systems of a woman.

The specialty continues to be based on operative arterial and venous surgery but since the early 1990s has evolved greatly. There is now considerable emphasis on minimally invasive alternatives to surgery. The field was originally pioneered by interventional radiologists, chiefly Dr. Charles Dotter, who invented angioplasty. Of note, Dr. Thomas Fogarty invented the balloon catheter which enabled angioplasty. Further development of the field has occurred via joint efforts between interventional radiology, vascular surgery, and interventional cardiology. This area of vascular surgery is called Endovascular Surgery or Interventional Vascular Radiology, a term that some in the specialty append to their primary qualification as Vascular Surgeon. Endovascular and endovenous procedures (e.g., EVAR) can now form the bulk of a vascular surgeon's practice.

The treatment of the aorta, the body's largest artery, dates back to Greek surgeon Antyllus, who first performed surgeries for various aneurysms in the second century AD. Modern treatment of aortic diseases stems from development and advancements from Michael DeBakey and Denton Cooley. In 1955, DeBakey and Cooley performed the first replacement of a thoracic aneurysm with a homograft. In 1958, they began using the Dacron graft, resulting in a revolution for surgeons in the repair of aortic aneurysms. He also was first to perform cardiopulmonary bypass to repair the ascending aorta, using antegrade perfusion of the brachiocephalic artery.

Dr. Edward "Ted" Dietrich, one of Dr. DeBakey's associates, went on to pioneer many of the minimally invasive techniques that later became hallmarks of endovascular surgery.[2] Dietrich later founded the Arizona Heart Hospital in 1998 and served as its medical director from 1998 to 2010. In 2000, Diethrich performed the first endovascular aneurysm repair (EVAR) for ruptured abdominal aortic aneurysm. Dietrich trained several future leaders in the field of endovascular surgery at the Arizona Heart Hospital including Venkatesh Ramaiah, MD[3] who served as medical director of the institution following Dietrich's death in 2017.[4]

Arterial and venous disease treatment by angiography, stenting, and non-operative varicose vein treatment sclerotherapy, endovenous laser treatment are rapidly replacing major surgery in many first world countries. These newer procedures provide reasonable outcomes that are comparable to surgery with the advantage of short hospital stay (day or overnight for most cases) with lower morbidity and mortality rates. Historically performed by interventional radiologists, vascular surgeons have become increasingly proficient with endovascular methods.[5] The durability of endovascular arterial procedures is generally good, especially when viewed in the context of their common clinical usage i.e. arterial disease occurring in elderly patients and usually associated with concurrent significant patient comorbidities especially ischemic heart disease. The cost savings from shorter hospital stays and less morbidity are considerable but are somewhat balanced by the high cost of imaging equipment, construction and staffing of dedicated procedural suites, and of the implant devices themselves. The benefits for younger patients and in venous disease are less persuasive but there are strong trends towards nonoperative treatment options driven by patient preference, health insurance company costs, trial demonstrating comparable efficacy at least in the medium term.

A recent trend in the United States is the stand-alone day angiography facility associated with a private vascular surgery clinic, thus allowing treatment of most arterial endovascular cases conveniently and possibly with lesser overall community cost.[citation needed] Similar non-hospital treatment facilities for non-operative vein treatment have existed for some years and are now widespread in many countries.

NHS England conducted a review of all 70 vascular surgery sites across England in 2018 as part of its Getting It Right First Time programme. The review specified that vascular hubs should perform at least 60 abdominal aortic aneurysm procedures and 40 carotid endarterectomies a year. 12 trusts missed both targets and many more missed one of them. A programme of concentrating vascular surgery in fewer centres is proceeding.[6]

It is unclear on the benefits and harms of wound drainage after lower limb arterial surgery.[7]

The main disease categories and procedures associated with them are listed below.

Previously considered a field within general surgery, it is now considered a specialty in its own right. As a result, there are two pathways for training in the United States. Traditionally, a five-year general surgery residency is followed by a 1-2 year (typically 2 years) vascular surgery fellowship. An alternative path is to perform a five or six year vascular surgery residency. In many countries, Vascular surgeons can opt into doing additional training in cardiac surgery as well as post-residency.

Programs of training are slightly different depending on the region of the world one is in.