Howard Walter Florey, Baron Florey OM FRS FRCP (24 September 1898 – 21 February 1968) was an Australian pharmacologist and pathologist who shared the Nobel Prize in Physiology or Medicine in 1945 with Sir Ernst Chain and Sir Alexander Fleming for his role in the development of penicillin.

Although Fleming received most of the credit for the discovery of penicillin, it was Florey who carried out the first clinical trials of penicillin in 1941 at the Radcliffe Infirmary in Oxford on the first patient, a police constable from Oxford. The patient started to recover, but subsequently died because Florey was unable, at that time, to make enough penicillin. It was Florey and Chain who actually made a useful and effective drug out of penicillin, after the task had been abandoned as too difficult.

Florey's discoveries, along with the discoveries of Fleming and Ernst Chain, are estimated to have saved over 200 million lives,[4] and he is consequently regarded by the Australian scientific and medical community as one of its greatest figures. Sir Robert Menzies, Australia's longest-serving Prime Minister, said, "In terms of world well-being, Florey was the most important man ever born in Australia."[5]

Howard Florey was born in Malvern, a southern suburb of Adelaide, South Australia, the youngest of three children and the only son.[5] His father, Joseph Florey, was an English immigrant, and his mother Bertha Mary Wadham was a second-generation Australian.[6][1]: 255  His sister Hilda Gardner became a bacteriologist and a pioneer of laboratory medicine.[7]

Florey was educated at Kyre College Preparatory School (now Scotch College) and then St Peter's College, Adelaide,[1] where he excelled in chemistry and physics, but not mathematics.[8] He also played various sports for the school: cricket, football, athletics, and tennis.[1]: 255  He studied medicine at the University of Adelaide from 1917 to 1921, paid entirely by a state scholarship he had achieved.[8]

Florey continued his studies at Magdalen College, Oxford, as a Rhodes Scholar under the tutelage of Sir Charles Scott Sherrington, receiving the degrees of BA in 1924 and MA in 1935.[5] In 1925, he left Oxford to attend the University of Cambridge, during which time he won a fellowship from the Rockefeller Foundation and studied in the United States for ten months. He returned to England in 1926 and was elected to a fellowship at Gonville and Caius College, Cambridge, and a year later he received the degree of PhD.[1]: 258–259 Flasks used in the cultivation of penicillin mould for large-scale production. One of the first flasks (centre) made using a biscuit tin. Ceramic flasks (rear) were used in production of penicillin. (Historical Collections, National Museum of Health and Medicine, M-722.10002, M-722.10003 and M-722.10227)

After Cambridge, Florey was appointed to the Joseph Hunter Chair of Pathology at the University of Sheffield in 1932. In 1935, he returned to Oxford, as Professor of Pathology and Fellow of Lincoln College, Oxford, leading a team of researchers. Working with Ernst Boris Chain, Norman Heatley and Edward Abraham, he read Alexander Fleming's paper discussing the antibacterial effects of Penicillium notatum mould.[1]: 260–262

In 1941, he and Chain treated their first patient, Albert Alexander, who had had a small sore at the corner of his mouth, which then spread, leading to a severe facial infection involving streptococci and staphylococci. His whole face, eyes and scalp were swollen to the extent that he had had an eye removed to relieve the pain. Within a day of being given penicillin, he started to recover. However, the researchers did not have enough penicillin to help him to a full recovery, and he relapsed and died. Because of this experience and the difficulty in producing penicillin, the researchers changed their focus to children, who could be treated with smaller quantities of penicillin.[9]

Florey's research team investigated the large-scale production of the mould and efficient extraction of the active ingredient, succeeding to the point where, by 1945, penicillin production was an industrial process for the Allies in World War II. However, Florey said that the project was originally driven by scientific interests, and that the medicinal discovery was a bonus:[10]

People sometimes think that I and the others worked on penicillin because we were interested in suffering humanity. I don't think it ever crossed our minds about suffering humanity. This was an interesting scientific exercise, and because it was of some use in medicine is very gratifying, but this was not the reason that we started working on it.[11]

Developing penicillin was a team effort, as these things tend to be.[12]

Florey shared the Nobel Prize in Physiology or Medicine in 1945 with Ernst Boris Chain and Alexander Fleming. Fleming first observed the antibiotic properties of the mould that makes penicillin, but it was Chain and Florey who developed it into a useful treatment.[13]

In 1958, Florey opened the John Curtin School of Medical Research at ANU in Canberra. In 1965, the Queen made him Lord Florey and he was offered, and accepted, the role of Chancellor of the Australian National University.[14]

He was awarded the Cameron Prize for Therapeutics of the University of Edinburgh and the Lister Medal in 1945, for his contributions to surgical science.[2] The corresponding Lister Oration, given at the Royal College of Surgeons of England later that year, was titled "Use of Micro-organisms for Therapeutic Purposes".[18] In 1946, the University of Sao Paulo awarded him an honorary doctorate.[19]

Florey was elected a member of the Royal Society in 1941 and became president in 1958.[1] In 1962, Florey became Provost of The Queen's College, Oxford. During his term as Provost, the college built a new residential block, named the Florey Building in his honour. The building was designed by the British architect Sir James Stirling.

On 4 February 1965, Sir Howard was created a life peer and became Baron Florey, of Adelaide in the State of South Australia and Commonwealth of Australia and of Marston in the City of Oxford.[20] This was a higher honour than the knighthood awarded to penicillin's discoverer, Sir Alexander Fleming, and it recognised the monumental work Florey had done in making penicillin available in sufficient quantities to save millions of lives in the war, despite Fleming's doubts that this was feasible. On 15 July 1965 Florey was appointed a Member of The Order of Merit.[21]

Florey was Chancellor of the Australian National University from 1965 until his death in 1968. The lecture theatre at the John Curtin School of Medical Research was named for him during his tenure at the ANU.[22] 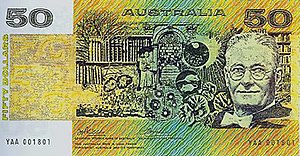 Florey's portrait appeared on the Australian $50 note for 22 years (1973–95),[23] and the suburb of Florey in the Australian Capital Territory is named after him.[24] The Florey Institute of Neuroscience and Mental Health, located at the University of Melbourne, Victoria,[25] and a lecture theatre in the University of Adelaide's medical school are also named after him.[26] The defunct Australian Student Prize, given to outstanding high-school leavers, was previously called the "Lord Florey Student Prize" in recognition of Florey.[27]

The Florey Unit of the Royal Berkshire Hospital in Reading, Berkshire, is named after him.[28]

The Florey Institute for Host–Pathogen Interactions at the University of Sheffield is named in his honour.[29]

The Florey Science Centre at St Peter's College, Adelaide, is named after him, as he attended the college. It was opened post 1950. The building facilitates science classes for students from Year 7 to Year 12. On the lowest floor's concourse there is a commemorative statue and plaque.[citation needed]

Howard Florey with sister Hilda Gardener on arrival in Melbourne, 1944

At the University of Adelaide, he met Ethel Reed (Mary Ethel Hayter Reed) (1900-1966), another medical student, who became both his wife and his research colleague. They had two children: Paquita Mary Joanna and Charles du Vé.[16][30] After the death of his wife Ethel, he married in 1967 his long-time colleague and research assistant Margaret Jennings (1904–1994). He died of a congestive heart failure in 1968 and was honoured with a memorial service at Westminster Abbey, London.

His sister Hilda Gardner (1890 – 1953) was an Australian bacteriologist, who was a pioneer of laboratory medicine in Australia, specialising in infections and infectious diseases. Joan Gardner, his niece through Hilda,was also a renowned microbiologist and infection control expert.[7]

Florey was an agnostic.[31]

Penicillin: The Magic Bullet is a 2006 Australian film production written by Gordon Glenn and financed by the Film Finance Corporation and Arcimedia Productions in association with Film Victoria.[32] Breaking The Mould is a 2009 historical drama that tells the story of the development of penicillin in the 1930s and '40s, by the group of scientists at Oxford headed by Florey at the Dunn School of Pathology. The film stars Dominic West as Florey, Denis Lawson, and Oliver Dimsdale; and was written by Kate Brooke and directed by Peter Hoar.