U.S. territory that is neither a U.S. state nor the District of Columbia
Not to be confused with the ISO statistical designation United States Minor Outlying Islands. 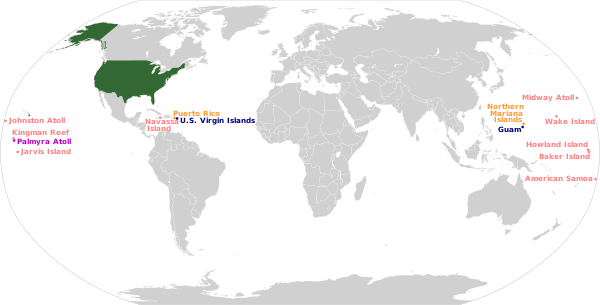 In the law of the United States, an insular area refers to U.S.-associated jurisdictions not part of the 50 states or the District of Columbia. This includes fourteen U.S. territories administered under U.S. sovereignty, as well as three sovereign states each with a Compact of Free Association with the United States.[1][2] The term also may be used to refer to the previous status of the Philippine Islands and the Trust Territory of the Pacific Islands when it existed.

A U.S. territory is considered "organized" when the U.S. Congress passes an organic act for it.[1] All of the five U.S. territories with a permanent non-military population have constitutions, locally elected territorial legislatures and executives, and some degree of political autonomy. Four of the five are "organized", but American Samoa is technically "unorganized" and subject to the direct jurisdiction of the Office of Insular Affairs.

The first insular areas that the United States occupied were Baker Island, Howland Island and Navassa Island (1857) then Johnston Atoll and Jarvis Island (both in 1858) would be claimed. After the War between the United States and Spain in 1898, several territories were taken that are still under U.S. sovereignty (Puerto Rico and Guam, both in 1898).[3] Palmyra Atoll was annexed along with the Republic of Hawaii (formerly a Kingdom) that same year. American Samoa was reclaimed the following year (1899). In 1917, at the height of World War I, Denmark sold the Danish Virgin Islands to the United States.[4]

The U.S. Navy annexed Kingman Reef in 1922. Spain had sold the Northern Mariana Islands to Germany in 1899.[5] The islands passed to Japan, which in turn lost them to the United States in 1945 after the end of World War II. The Guantanamo Bay Naval Base, located on the southern side of Guantanamo Bay and taken from Spain in 1898, is not a U.S. outlying territory but a U.S. military base on formally "leased" land on the island of Cuba.[6]

The Marshall Islands became self-governing in 1979 and fully independent along with the Federated States of Micronesia in 1986. Palau achieved independence in 1994.[7] The three countries maintain sovereignty with free association status with the United States, which provides them with defense assistance and economic resources.

Congress has extended citizenship rights by birth to all inhabited territories except American Samoa, and these citizens may vote and run for office in any U.S. jurisdiction in which they are residents. The people of American Samoa are U.S. nationals by place of birth, or they are U.S. citizens by parentage, or naturalization after residing in a State for three months.[17] Nationals are free to move around and seek employment within the United States without immigration restrictions, but cannot vote or hold office outside American Samoa.[18]

The U.S. State Department and the U.S. Code also use the term "insular area" to refer not only to territories under the sovereignty of the United States, but also those independent nations that have signed a Compact of Free Association with the United States. While these nations participate in many otherwise domestic programs, and full responsibility for their military defense rests with the United States, they are legally distinct from the United States and their inhabitants are neither U.S. citizens nor nationals.[1]

The following islands, or island groups, are considered insular areas: 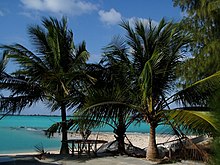 Three sovereign UN member states which were all formerly in the U.S. administered United Nations Trust Territory and are currently in free association with the U.S. The U.S. provides national defense, funding, and access to social services.

After achieving independence from the Trust Territory of the Pacific Islands, these states are no longer under U.S. sovereignty and thus not considered part of the United States.[24] Some programs in these states are administered by the U.S. Office of Insular Affairs, along with other federal entities such as the Department of Defense.