Sushruta, or Suśruta (Sanskrit: सुश्रुत, IAST: Suśruta, lit. 'well heard'[2]) was an ancient Indian physician and world's first surgeon known as “Father of Surgery” , “Father of Plastic Surgery" for inventing and developing surgical procedures.[3] His work on the subject, the Sushruta Samhita (Sushruta's Compendium) is considered one of the oldest texts in the world on plastic surgery[4] and is highly regarded as one of the Great Trilogy of Ayurvedic Medicine, the Brihat-Trayi; the other two being the Charaka Samhita, which preceded it, and the Astanga Hridaya, which followed it.[5]

The Sushruta Samhita is one of the most important surviving ancient treatises on medicine and is considered a foundational text of Ayurveda.[6] The treatise addresses all aspects of general medicine, but the impressive chapters on surgery have led to the false impression that this is its main topic. The translator G. D. Singhal dubbed Suśruta "the father of surgery" on account of these detailed accounts of surgery.[7][8][9][10]

The Compendium of Suśruta locates its author in Varanasi, India

The early scholar Rudolf Hoernle proposed that some concepts from the Suśruta-saṃhitā could be found in the Śatapatha-Brāhmaṇa, which he dates to the 600 BCE,[11] and this dating is still often repeated. However, during the last century, scholarship on the history of Indian medical literature has advanced substantially, and firm evidence has accumulated that the Suśruta-saṃhitā is a work of several historical layers. Its composition may have begun in the last centuries BCE and it was completed in its present form by another author who redacted its first five chapters and added the long, final chapter, the "Uttaratantra." It is likely that the Suśruta-saṃhitā was known to the scholar Dṛḍhabala [Wikidata] (fl. 300–500 CE), which gives the latest date for the version of the work that has come down to us today.[12] It has also become clear through historical research that there are several ancient authors called "Suśruta" who might be conflated.[12]

According to Bhishagratna, an influential translator who published in 1907, the Mahabharata, an ancient Indian epic text, represents a Suśrut as one of the sons of the ancient sage Vishvamitra.[13] Bhisagratna also asserted that Sushruta was the name of the clan to which Vishvamitra belonged.[13] In the century since Bhishagratna, our knowledge of Suśruta and the Suśrutasaṃhitā has been transformed by newer discoveries and scholarship, most of which has been surveyed in volume IA of Meulenbeld's History of Indian Medical Literature (5 vols, 1999–2002).[14]

The name Suśruta appears in later literature in the treatise on medicinal garlic that is included in the Bower Manuscripts (sixth century CE),[15] where Suśruta is listed as one of the ten sages residing in the Himalayas.[15]

Sushruta attracted a number of disciples who were known as Saushrutas and were required to study for six years before they even began hands-on training in surgery. Before starting their training, they had to take a solemn oath to devote themselves to healing and to do no harm to others;which can be compared to Hippocratic Oath. After the students had been accepted by Sushruta, he would instruct them in surgical procedures by having them practice cutting on vegetables or dead animals to perfect the length and depth of an incision. Once students had proven themselves capable with vegetation, animal corpses, or with soft or rotting wood – and had carefully observed actual procedures on patients – they were then allowed to perform their own surgeries. These students were trained by their master in every aspect of the medical arts, including anatomy.[16][17]

Sushruta on medicine and physicians 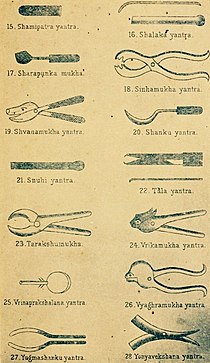 Ancient poster by Shushruta, given in Sushruta Samhita showing surgical instruments, in which most of them still continue to exist today.

Sushruta wrote the Sushruta Samhita as an instruction manual for physicians to treat their patients holistically. Disease, he claimed (following the precepts of Charaka), was caused by imbalance in the body, and it was the physician's duty to help others maintain balance or to restore it if it had been lost. To this end, anyone who was engaged in the practice of medicine had to be balanced themselves. Sushruta describes the ideal medical practitioner, focusing on a nurse, in this way:

That person alone is fit to nurse, or to attend the bedside of a patient, who is cool-headed and pleasant in his demeanor, does not speak ill of anyone, is strong and attentive to the requirements of the sick, and strictly and indefatigably follows the instructions of the physician. (I.34)[18]

Like other Sanskrit texts, the Sushruta Samahita also traveled from India to other parts of the world. During the early eighth century, the text was translated into Arabic as ‘Kitab Shah Shun al-Hindi’, by an Indian medical practitioner named Mankah on orders of Yahya Barmakid, a powerful minister of Caliph Harun-al-Rashid of Baghdad.There are also historical references to this in the court of king Yasovarman I (889 CE-900 CE) of Cambodia as well as in the monasteries of Tibet. The first European translation of Sushruta Samhita was published by Hessler in Latin in the early 19th century. The first complete English translation was done by Kaviraj Kunja Lal Bhishagratna in three volumes in 1907 in Calcutta.[19]

The highlight of Sushruta's surgical magnificence was the surgery of nasal reconstruction or rhinoplasty (repairing the disfigured nose with a flap of skin from the forehead) that he used to reconstruct noses that were amputated as a punishment for crime. The technique is practised almost unchanged to this day, the pedicled forehead flap being named the Indian flap. This knowledge of plastic surgery existed in India up to the late 18th century as can be seen from reports in the Gentleman's Magazine, London, October 1794.[20]

In "The source book of plastic surgery", Frank McDowell aptly described Sushruta as “through all of Sushruta's flowery language, incantations and irrelevancies, there shines the unmistakable picture of a great surgeon . Undaunted by his failures, unimpressed by his successes, he sought the truth unceasingly and passed it on to those who followed. He attacked disease and deformity definitively, with reasoned and logical methods. When the path did not exist, he made one.”[21]